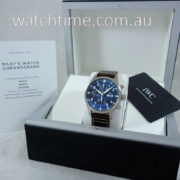 IWC pays tribute to Antoine de Saint-Exupéry, best-selling author, famed pilot & adventurer. His book Le Petite Prince has captured the hearts of young and old since its initial publication in 1936. The book has since sold more than 150 million copies & been translated into more than 250 languages & dialects. Engraved on the back of the case is the little prince with his coat and sword, just the way Saint-Exupéry drew him back in the 1940s